**This was a post that I started awhile back, but evidently never finished or posted. I came across it in my drafts and decided to finish it and post it. 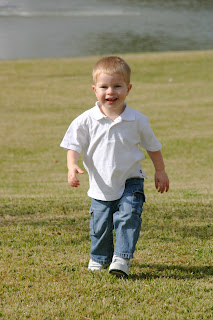 Kids say the darndest things...that is how the saying goes, and boy is it a good saying. So true. Jacob is no exception. Once he started really talking (which at the time, seemed a bit late to me, but I'm sure it was right on track), he's never stopped.
He picks up new words all of the time - and actually uses them appropriately for the most part. He used the word plenty the other day. And discreet. Both of them correctly. Yes...he's 2.
For awhile, when Jacob wouldn't know the name of something or the right word to use in a situation, we would try to come up with a 'kid-friendly' term to describe what was going on. We quickly learned that Jacob has an amazing memory and a knack for taking information he has learned and using it in situations different than the one he learned it in. We decided then to go ahead and tell him the correct names for things, explain what is going on when he asks questions, and basically talk to him like he was older than 2. I am still amazed at how well he comprehends what we say and stores away the information.
Sometimes though, when we say a word, Jacob hears what he wants to hear. Occasionally, he makes up a new word based on what he heard us say. Like 'ruffin'. This is what Jacob says when 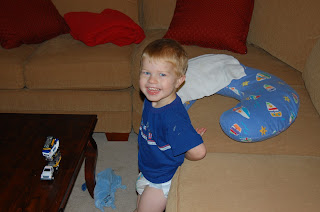 Luke is fussin. Other times, he hears a word he already knows for something else. Like elevator, for example. When he asked what they were, we told him. But instead of hearing elevator, he heard alligator. And that is what he calls them, even though he has been corrected. Another example of this is naked. He knows what it means, but instead he calls it bacon. This one flat cracks me up everytime he says he or Luke is 'bacon' at bathtime.
Some words, he learned early on when he couldn't always make the sounds he wanted to, and he continues to say them incorrectly today. Two examples of this are milk - which he says nilk, and sandwich, which he calls fuenich. 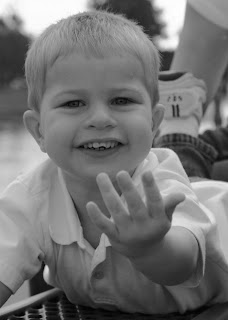 And finally, in song. This situation happens to just about everyone. When you hear a song, you aren't always sure of the words. Some people just don't sing the words if they don't know them, and others insert words they think might fit. Classic example in CCR's "Bad Moon Rising" song "there's a bad moon on the rise" sounds like "there's a bathroom on the right." For Jacob, it is a much simpler song. The Farmer In the Dell. In the second verse, the farmer takes a wiPe, according to Jacob, not a wife. And the cat, takes a raP, not a rat.
We've tried to correct Jacob, but now that he knows he's wrong, he thinks it is hilarious, so he continues. Oh well - it's cute. There are probably many many more examples of Jacob's word mixups....I'll have to add more as I remember them or he says them again. 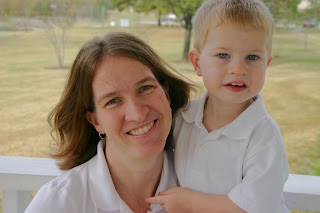 Sarah
Like many of you, I play many roles in life. I am a SAHM of 2 young boys, Jacob and Luke, and a wife of 8 1/2 years to David. I am also a big and little sister, daughter, granddaughter, and friend.