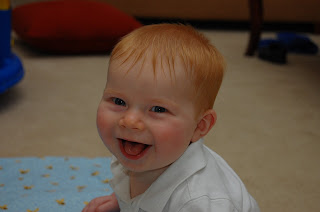 For those of you who have had a baby who gets up to eat during the night 'just because' and you finally realize it and decide to do something about it...you know what I am going through right now.
Luke is now 6 months old (today!) and up until a few nights ago was still getting up to eat 2 times a night. On a few occasions he has slept for an 8-9 hour stretch before waking to eat, but those nights are far and few between. But, the fact that they exist tells me that it is possible and he doesn't really need to eat - he is doing it out of habit. For some reason or another, I have postponed 'working' on it, but now that he is well and there is only Jacob and me to hear him cry, we have moved to the 'cry-it-out' method. And y'all, it is hard. Luke is usually such a happy child, it pains me to hear him cry - and boy does he cry with gusto.
I vaguely remember doing this with Jacob, but mostly when putting him to bed. I think we ended up just rocking him to sleep so we didn't have to deal with the crying and gave him a pacifier at night to get him back to sleep when he woke during the night instead of feeding him. Luke usually goes to sleep without too much trouble, but when he wakes at night, he thinks he needs to eat - everytime. He won't take a pacifier, so I can't pacify his obvious need to suck and go back to sleep.
Lately, his routine has been to sleep for about 6 hours and then he is up ready to eat. He goes right back to sleep after eating and sleeps for 3-4 hours before getting up to eat again. It really has been pretty easy to handle. But....he really needs to quit it. (I know that is exactly what the pedi is going to tell me tomorrow at his 6 month checkup.) 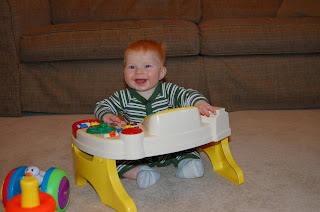 So - the first night, he woke up at 11:40pm. He cried for nearly 1 1/2 hours straight. Seriously! I went in every 6-8 minutes trying to calm him. I rocked him to sleep the first 2 times, but he immediately woke up when I put him back in bed. Every other time, I would just pat his back to get him to sleep. It didn't work. Finally, at 1am, he cried himself to sleep, and didn't wake to eat until 3:45am. I couldn't do it again in one night, so I fed him and back to sleep he went. At least we were down to one feeding before waking for the day at 6:45am. The next night, he woke a bit later, and this time only cried for 30 minutes before giving up and going back to sleep. He was still up at 3:45am to eat. So, no progress there, but at least I wasn't sitting in bed with tears in my eyes and earplugs in my ears to muffle (too loud to completely block it out) the crying for an hour and a half. This gets easier, right? We'll see tonight...
Posted by Sarah at 8:43 PM

Sarah
Like many of you, I play many roles in life. I am a SAHM of 2 young boys, Jacob and Luke, and a wife of 8 1/2 years to David. I am also a big and little sister, daughter, granddaughter, and friend.